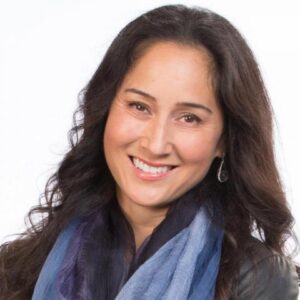 Dr. Cynthia Breazeal is an Associate Professor of Media Arts and Sciences at the Massachusetts Institute of Technology where she founded and directs the Personal Robots Group at the Media Lab. She is also founder and Chief Scientist of Jibo, Inc. She is a pioneer of Social Robotics and Human Robot Interaction. She authored the book Designing Sociable Robots, and she has published over 100 peer-reviewed articles in journals and conferences on the topics of Autonomous Robotics, Artificial Intelligence, Human Robot Interaction, and Robot Learning. She serves on several editorial boards in the areas of autonomous robots, affective computing, entertainment technology and multi-agent systems. She is also an Overseer at the Museum of Science, Boston.

Her research focuses on developing the principles, techniques, and technologies for personal robots that are socially intelligent, interact and communicate with people in human-centric terms, work with humans as peers, and learn from people as an apprentice. She has developed some of the world’s most famous robotic creatures ranging from small hexapod robots, to embedding robotic technologies into familiar everyday artifacts, to creating highly expressive humanoid robots and robot characters. Her recent work investigates the impact of social robots on helping people of all ages to achieve personal goals that contribute to quality of life in domains such as physical performance, learning/education, health, and family communication + play over distance.

Jibo, Inc. brings the technologies, design insights, and user experience of social robots to the home as the world’s first family robot. Jibo is designed to help busy families to communicate, coordinate and connect with loved ones with greater ease, efficacy, and delight. As an open platform, Jibo enables third party developers to bring the humanized engagement and emotional lift of social robots to their apps, content and services.

Dr. Breazeal is recognized as a prominent global innovator. She is a recipient of the National Academy of Engineering’s Gilbreth Lecture Award and an ONR Young Investigator Award. She has received Technology Review’s TR100/35 Award, TIME magazine’s Best Inventions of 2008, and has been honored as finalist in the National Design Awards in Communication. Her work has also won numerous best paper awards at top academic conferences. In 2014 she was recognized as an entrepreneur as Fortune Magazine’s Most Promising Women Entrepreneurs, and she was also a recipient of the L’Oreal USA Women in Digital NEXT Generation Award. The same year, she received the 2014 George R. Stibitz Computer & Communications Pioneer Award for seminal contributions to the development of Social Robotics and Human Robot Interaction.

Joanna J Bryson is an academic recognised for broad expertise on intelligence, its nature, and its consequences. She advises governments, transnational agencies, and NGOs globally, particularly in AI policy. She holds two degrees each in psychology and AI (BA Chicago, MSc & MPhil Edinburgh, PhD MIT). Her work has appeared in venues ranging from reddit to the journal Science.  From 2002-19 she was Computer Science faculty at the University of Bath; she has also been affiliated with Harvard Psychology, Oxford Anthropology, The Mannheim Centre for Social Science Research, The Konrad Lorenz Institute for Evolution and Cognition Research, and the Princeton Center for Information Technology Policy. During her PhD she first observed the confusion generated by anthropomorphised AI, leading to her first AI ethics publication “Just Another Artifact” in 1998. She has remained active in the field including coauthoring the first national-level AI ethics policy, the UK’s (2011) Principles of Robotics. She continues to research both the systems engineering of AI and the cognitive science of intelligence, with present focusses on the impact of technology on human cooperation, and new models of governance for AI and ICT. She is presently the Hertie School’s Professor of Ethics and Technology, a position she took up on 1 February 2020.

Natasha Schüll is a cultural anthropologist and associate professor in the Department of Media, Culture, and Communication. Her wo rk explores the psychic life of technology with a focus on themes of addiction, anxiety, and affect modulation. Her first book, ADDICTION BY DESIGN: Machine Gambling in Las Vegas (Princeton University Press 2012), draws on extended research among compulsive gamblers and the designers of the slot machines they play to explore the relationship between technology design and the experience of addiction. Her next book, KEEPING TRACK (Farrar, Straus, and Giroux, under contract), concerns the rise of digital self-tracking technologies and the new forms of anxiety and self-governance they engender. Her documentary film, BUFFET: All You Can Eat Las Vegas, has screened multiple times on PBS and appeared in numerous film festivals.